How Uranium from Great Bear Lake
Ended Up in A-Bombs

Uranium is discovered. It is the heaviest naturally occurring element on earth. It is named after the newly discovered planet Uranus.

For 150 years, uranium has little commercial value and no strategic importance. It is used as a colouring agent in pottery and glass.

Henri Becquerel discovers that uranium ore spontaneously gives off an invisible, highly penetrating form of energy, which he calls radioactivity.

Radium is used to make dials glow in the dark, and to shrink malignant tumors. It is also used as a quack nostrum.

Radium becomes the most valuable substance on earth, in the early 1920's selling for $120,000 a gram. It is mined in Czechoslovakia, England, France, Russia and the Colorado Plateau (USA).

By mining rich deposits in the Congo, a Belgian company drives the price of radium down to about $75,000 per gram, forcing its competitors out of business and achieving a world monopoly.

Evidence shows that ingestion of minute quantities of radium can be deadly: 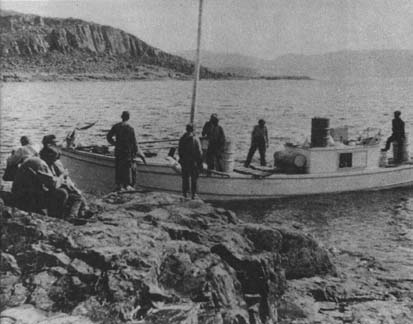 Canadian Government publications warn of the serious health hazards associated with chronic exposure to even minute quantities of dust from high-grade radioactive ores -- in particular the Great Bear Lake ores.

Mine workers and ore carriers are not told of these concerns.

Evidence reveals that underground miners beathing radon gas given off by radioactive ores will eventually suffer an increase in lung cancer and other lung diseases.

These hazards are not communicated to the miners, nor are adequate ventilation practices put in place.

All radium mines are closed by 1940 due to a glut of radium, declining demand, and the onset of WWII.

German scientists discover that uranium atoms can be fissioned, or split, releasing energy. Scientists everywhere soon realize that if a "chain reaction" can be achieved, a powerful "atomic bomb" can be built using uranium.

The U.S. Government orders 8 tons of uranium for military research from Eldorado, the Canadian company that owned and operated the Great Bear Lake mine. Uranium is extracted from existing radium residues.

The US Government orders 60 tons of Canadian uranium from Eldorado; as a result, Eldorado decides to re-open the mine at Great Bear Lake -- in secrecy -- with special permission from the Canadian government. 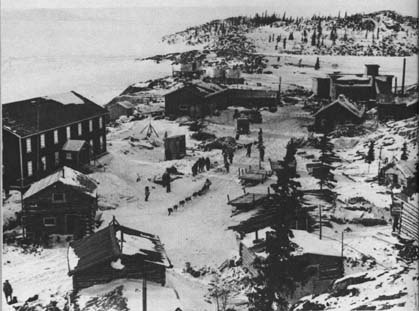 Again, ore concentrates are carried in cloth bags, without benefit of protective clothing or showers, by nomadic people -- the Sahtu-Dene -- who have lived, fished, and hunted for thousands of years on the shores of Great Bear Lake.

The US Army orders another 350 tons of uranium from Eldorado.

The U.S. Army acquires 1200 tons of rich uranium concentrates from the Congo -- this material had been secretly stored, since 1939, in a warehouse on Staten Island, in New York Harbour, by its Belgian owners.

The U.S. Army orders another 500 tons of uranium from Eldorado, before deliveries on the earlier, 350-ton contract have been completed.

However, when asked to refine the Staten Island concentrates on a priority basis, Eldorado interrupts its delivery of Canadian uranium to the US and begins to process the Congolese uranium instead.

At this point over 220 tons of uranium from Great Bear Lake have already been delivered. From this point on, uranium from the Congo, refined at Port Hope, will dominate the Manhattan Project.

Uranium from Canada, Colorado, and the Congo is used in the World War II Atom Bomb Project: